Jim Richardson's Barking Mad in mark-rounding action today at the Farr 40 Pre-Worlds. Photo by Sara Proctor/Sailfastphoto.
In the strength of yesterday's 1-2-1 scores and top-ten finishes in today's two final races, Jim Richardson from Newport, RI and his Barking Mad team have won the 2012 Farr 40 Pre-Worlds, held at Chicago YC. Being the last of five events in the 2012 Farr 40 North American Circuit, the win also gives Richardson the overall win in this series as well.

Runner-up in the Pre-Worlds and third in the overall Circuit is Wolfgang Schaefer from Luneburg, Germany and his team on Struntje Light. Schaefer finally broke a string of third place finishes to finish second, but was unable to overcome Alberto Rossi's Enfant Terrible team from Italy to claim the runner-up position in the overall series.

The day started in beautiful late summer sunshine, but with no wind, as a strong high pressure dominated the entire upper Midwest US. Principal Race Officer Peter Reggio elected to post the AP flag until 1230 local time, as a light onshore breeze built steadily to bring sailable conditions to the lakefront.

Race 1 started in 7-8 knots, light conditions that suited Annapolis-based Kevin McNeil and his Nightshift team, who had relocated to race here in Lake Michigan for the last half of the summer. McNeil started strong to take the early lead, and tactician Andrew Campbell played the chess game well to keep them ahead of the chasing pack, led by Phillip Dowd's local-based Inferno team and Asterisk Uno from Turkey, helmed for this event by Levent Ozonur in owner Hasip Gencer's absence.

A little more breeze in Race 2 had the pack a little too hungry at the start, pushing the line so hard that Reggio gave a General Recall and flew the 20% penalty Z flag to keep them back before the next start. The incentive worked, and in about 8-9 knots this time it was Bob Hughes and his Michigan-based team on Heartbreaker that took the early lead. Unlike in yesterday's Race 3 when they were in a similar position, this time Hughes managed to hold and even extend on their lead to take the win.

CYC Junior Sailor William Plovanic racing aboard Guido Belgiorno-Nettis's Transfusion. Photo by Sara Proctor/Sailfastphoto.
But the team who had the best day on scores of 4-2 was Nico Poons's Charisma from Monaco, led by Volvo Ocean Race-winning tactician Stu Bannatyne. The team improved in every race, starting the series out in 14th and finishing the last race today in second. "We're on a positive trend," said Poons, "we'll hope we can keep the momentum."

Another feature of today was the invitation extended to members of the Chicago YC Junior Sailing program to race aboard the Farr 40's during today's racing. Twenty junior sailors were given the opportunity to be part of each team, with some participating in crew work and others simply hiking out.

Sailing aboard Guido Belgiorno-Nettis's Australian-based Transfusion team was 11-year old William Plovanic, an Opti sailor from Chicago YC. "It was really fun today," said Plovanic. "I learned a lot about set-up in the starts that I could try when frostbiting in the Optis."

"Having the juniors sail with us is a fantastic program," says Farr 40 Class Manager Geoff Stagg. "It gives us the chance to expose the new generation to high-level racing and get them inspired to want to put this into their own sailing futures."

With the Farr 40 Pre-Worlds now completed, so is the opening act of the Rolex Farr 40 World Championship, which starts on Monday, September 17th and features daily racing until Thursday, September 20th. 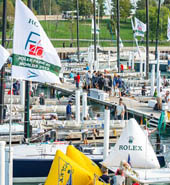