Enfant Terrible and Flash Gordon are also on the podium. Pazza Idea wins the Corinthian Class

Porto Cervo, Italy: Plenty, owned by Alex Roepers with tactician Terry Hutchinson, the defending champions at the start of the event, are World Champions for the third time in the Farr 40 One Design Class. Theirs is the top spot on the podium at the 20th edition of the Rolex Farr 40 World Championship organised in Porto Cervo by the Yacht Club Costa Smeralda with the support of Title Sponsor Rolex and the Farr 40 Class Association.

Vice-Champion for 2017 is Alberto Rossi's Enfant Terrible with tactician Vasco Vascotto, whose excellent performance today let her finish the event just three points behind Plenty. Flash Gordon (Jahn/Reeser) was also very close, so it was a fight to the finish for the title. Corinthian World Champion is Bresciani's Pazza Idea with Matteo Ivaldi tactician and Claudia Rossi at the helm. At twenty-four years old, Rossi is the youngest person to win in the Farr 40 Class.

The final day of racing at the Rolex Farr 40 Worlds 2017 was unforgettable: excellent weather with north easterly breezes between 16 and 20 knots filling the fleet's white spinnakers against a backdrop of blue skies and the island of Caprera.

Excellent conditions and excellent sailing. Top-level competition between the teams: Plenty saw its comfortable lead eroded by Enfant Terrible and Flash Gordon in the day's first three races. It was down to the fourth and last race at this World Championship: would Plenty be able to come back from her middling day's results to beat Enfant Terrible that had placed 1 -2- 1 so far? Plenty's team did what they had to do and defended their title.

It was right down to the wire in the Corinthian fleet too. At the start of the day Zen was leading MP30+10 and Pazza Idea by just one point. But Pazza Idea, helmed by Claudia Rossi, daughter of Enfant Terrible's owner Alberto Rossi, did three excellent races and edged out Zen in the fourth and final race.

After nine hard fought races, the 20th Rolex Farr 40 World Championship concluded with a prize ceremony on the terrace of the Yacht Club Costa Smeralda. Commodore Riccardo Bonadeo opened with these words: "Celebrating the twentieth edition of a World Championship is not something that happens every day. Celebrating the twentieth year of the Rolex Farr 40 World Championship on the year of the fiftieth anniversary of the YCCS fills me with pride. Part of our success is thanks to this beautiful part of Sardinia that offers such a wide range of wind conditions and sailing courses. Thanks to the Farr 40 Class for choosing us for the third time for their World Championship and thanks to Geoff Stagg who will retire after this event and pass the management of the Class on to his son Brady. Thanks to Rolex, who is partner both of the Farr 40 Class and of the YCCS. Congratulations to the winners and thanks to all the owners and their teams for making this week of sailing so special. I also want to thank all of those who have made this event possible: the Race Committee, the International Jury and all the YCCS staff."

Geoff Stagg, Farr 40 Class Manager echoed Bonadeo's words: "It couldn't have ended any better. The weather was perfect; the Race Committee was perfect. It was down to the last race as usual. I'm a very happy man. It's time to move on now and yet the younger guys take control of things. This is a big moment, the 20th anniversary of the Rolex Farr 40 World Championship, the fiftieth anniversary of the Yacht Club Costa Smeralda which is probably the best yacht club in the world. The racing today was absolutely spectacular, and I repeat spectacular! I'm happy, this is the best possible moment to begin my retirement, the best way to go out in style."

Alex Roepers, owner/helmsman aboard Plenty: "Both Enfant and Flash sailed brilliantly today. We had a few small errors and in this Class if you make a mistake you get punished. We dug a hole for ourselves in race 1, we had a miscommunication at the start of race 2 and from last place fought back to fourth, and in the third race we had a small issue with a jib override and we ended up having to cut the jib sheet at the start because we couldn't tack. So it was very exciting going into the fourth race. There we had a good start and did what we know how to do. We never got down on ourselves, we knew what the issues were, we were very focused on the fourth race and didn't let it get to us that we had had three bad races. We did what we had to do in race 4. So this is the third Farr 40 World Championship that we have won. We won San Francisco in 2014, in 2015 we lost in the last leg of the last race by one point, but we got the title back in 2016. It's very sweet to win this one at the YCCS, in Porto Cervo, in Sardinia, in Italy." 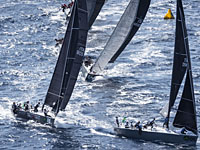 Alberto Rossi, first runner-up, owner/helmsman of Enfant Terrible: "We're happy to have ended the event after a good day of sailing. After yesterday we were a bit down, but we never give up and today were rewarded for it. We got excellent starts today and we sailed well. I think I did a good job at the helm, Vasco picked the best options and we were the boat of the day. But Plenty was strongest overall and deserved to win the Championship. I'm happy for my daughter Claudia who won in the Corinthians. She and her team staged an excellent comeback and I'm happy to announce that next year she will be helming my boat when I can't get away from work."

Claudia Rossi, Corinthian World Champion, helmsman on Pazza Idea: "The reality still has to sink in, I really wasn't expecting this! It was great out there today, we stayed focused on the victory right to the end and we only managed to get it in the final race. Thanks to the whole team for making this dream come true."